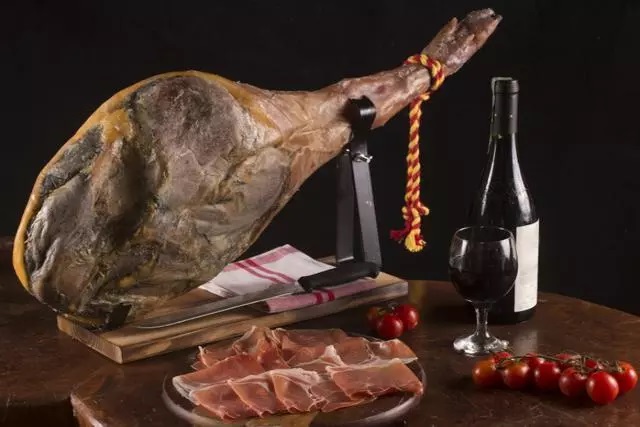 Among the various culinary achievements in Spain, Spanish ham is undoubtedly one of the most dreamy ones. Although it may not be as popular as paella and Tapas, anyone who tasted it will immediately fall into the taste of Spanish ham. Inextricable. Spanish ham is the world’s top cuisine. In terms of raw materials, it can be divided into two categories: Iberian ham and Serrano ham. The former is much higher than the latter, the pigs are more expensive, the production is more elaborate, and of course, the price is more expensive.

Serrano ham is made from common white-hoofed pigs or other mixed-breed pigs and is common in the market and in restaurants; Iberian ham is made from Iberian black-hoofed pigs with more than 75% of the blood. It is aroma. A rich, sophisticated ham with a complex taste. They are stocked in the nearby virgin forests. Every autumn, the fruits of the mountains and plains fall to the ground after ripening. These black-haired pigs feed on acorns, herbs, olives and roots. They grow up happily in nature and produce very little. And the government has strict quality control, so even in Spain, the price of Iberian ham is very expensive.

Iberian ham, according to the different black pigs, is divided into 3 different levels:

1. Ham made from Iberian black pigs fed with mixed feed.

2. Ham made from Iberian black pigs fed with acorn and mixed feed.

3, the top is the ham made entirely of Iberian black pigs that are stocked in the jungle and eat acorns. The best Iberian ham is eaten now, sliced ​​and placed on a plate so that each piece of ham is in full contact with the air, the oil gradually oozes out, and the fat dissolves slowly to a deep color at room temperature. In the red lean meat, put a piece in the mouth, squeeze it slightly in the mouth and then chew it. This red and white piece of ham is already the ultimate in meat. It is very stimulating to the taste, salty and sweet, and slowly chews infinite aftertaste. Advanced ham does not require a knife and fork to eat, but it is a kind of etiquette to grab it with your hand.

In addition to the special ingredients, Spanish ham also has a special cut. In Spain, the ham has a ham chef who cuts the ham. The ham teacher not only needs a certain talent and effort, but also has to undergo four or five years of professional training. The ham master’s skills are no less than the chefs who make big dishes. The ham teacher usually has to study the basic theoretical basis of the school for one year before he can practice. The theoretical course is mainly to understand the growth of the bones and muscles of the pigs. The composition of the muscles and bones is different because of the different breeds of pigs. Therefore, you must cut the knife before you can find it.

The cutter can be said to be an important tool for the ham master. The senior master usually has to have seven or eight of them. What kind of pigs, what parts of the meat, what time of the meat, and the cutters used are different. Check, cut off or cut the piece of meat with a knife, then the test will have to deduct a lot of points, or even fail. As usual, the hammaster cuts the ham into pieces that are too thin to be thinner, but consider the size of the cross section of the ham, which cannot be cut, nor can it be hollow in the middle. Therefore, it is easy to master this technique, but the actual operation is not the same thing. In order to enjoy the perfect scent and texture of Spanish ham and cut every piece of ham, let’s first distinguish each part of the ham:

Maza – the main part of the ham

Contramaza – the opposite side of the main part of the ham First, let’s take a closer look at the essential tools of the Cheybilla ham: three different knives – a wide bladed knife, a pointed knives, a narrow bladed knife, and one to keep Sharp edge sharpener. Secondly, for the sake of safety, prepare a shelf that can hold the ham well.

Cleaning work is also essential before cutting the ham. Use a wide-blade knife to cut the calf to the end, remove the outer layer, and leave a clean, smooth ham for slicing. The most important thing is to leave as much as you can.

Then fix the ham on the shelf vertically, cut it with a long knife, and cut off the top layer of fat to cover the surface of the ham to preserve the ham exposed to the outer layer without being dried.

Since the whole ham has to be eaten for a long time, it is necessary to start from the flat side and the narrower the cut. In order to save the ham without drying it, it should always be cut from one side – the important thing is that the ham slices must be thin so that each piece can exert its best taste.

When cutting to the hip joint, use a sharp knife to separate the meat and bones into a large piece of ham, then continue to cut the ham around the bones, without wasting the ham. Try to cut the main part of the ham into thin slices along different distributions so that you can get different tastes and tastes.

When one side is cut, rotate the ham on the shelf to cut the other side. The last remaining parts that can’t be sliced ​​can be cut into small pieces to enjoy, so that you can fully enjoy the entire Spanish Iberian ham.